I already have a Blade 350QX3 and it’s very fun to fly. It performs very poorly as an FPV racing drone. The camera is bulky and crashes always result in having to buy a new body. To be fair, I don’t think the engineers had FPV racing in mind when designing this drone. The QX3 is much more focused on aerial photography. In that realm it performs spectacularly. So how about an FPV rig? To make this all work I had to go and buy some parts.

All of this totals to $172.76. This gets closer to $100 if you choose to wait for all the Banggood items to ship from their CN warehouse, but that just takes too long.

I had to start with something. Getting anyting made will act as a good starting base for me to work off of. That does not excuse me for this first design. It looks horrible.

So after some deep thinking I went back to Fusion and tried again. This time I make something much more viewable. While documenting this, I noticed that I did not reference any existing design. Usually while building ariel machines a lot more than looks goes into the design. I am very lucky that this works.

I am going to guess that it took a collective 30 hours to print all the parts on my janky 3d printer. This one was a long haul. 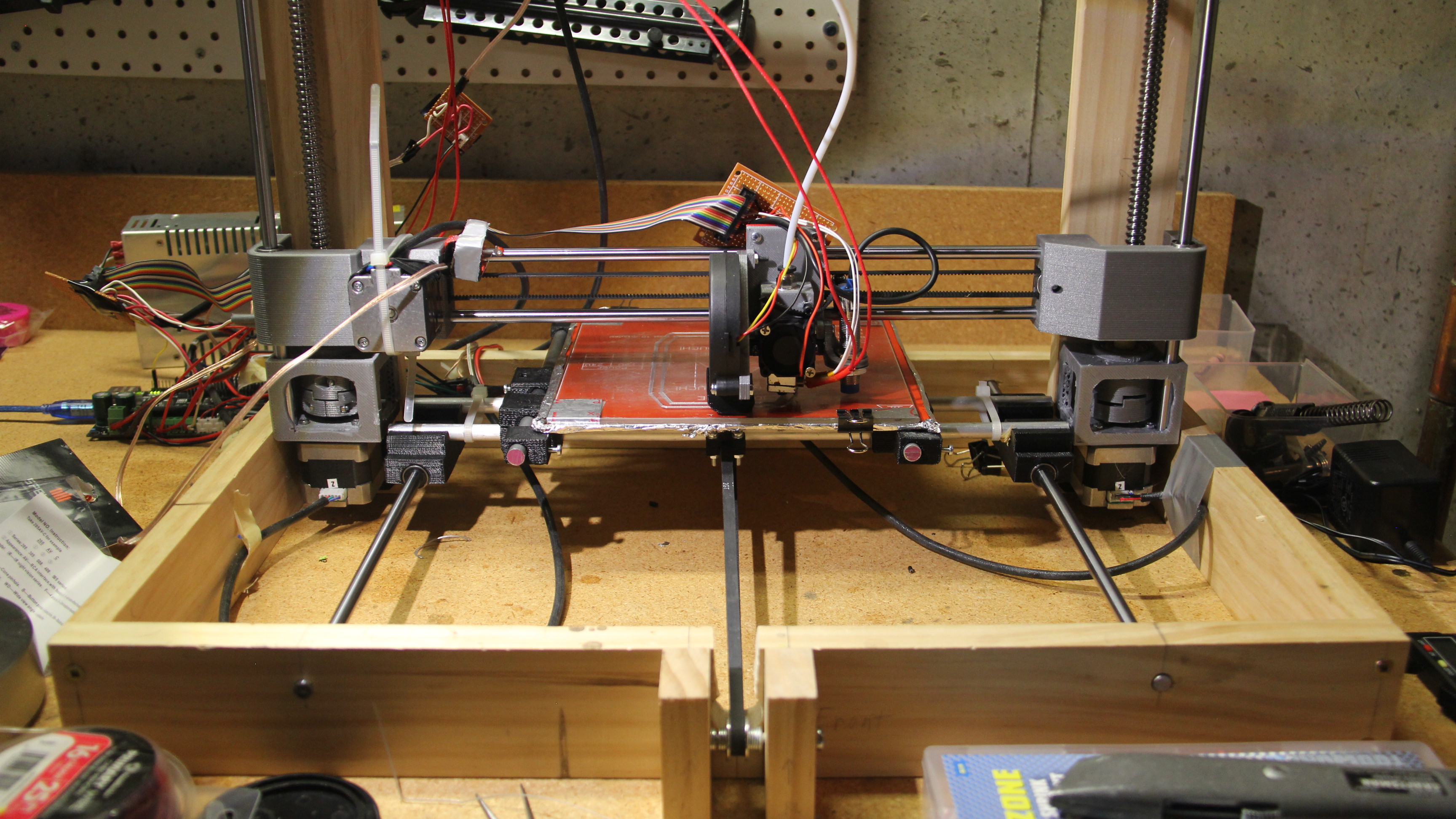 Here is the largest part of the body being printed. This odd-shaped square thing took over 3 hours to print.

I started the assembly with the electronics. The main components are the Electronic Speed Controller (ESC), Power Distribution Board (PDB), and the Flight Controller. The ESC is what will send current to the four motors. The PDB takes the current from the battery and delivers it to the other components. Finally, the Flight Controller takes in all the telemtry data from the on-board sensors and uses that to tell the ESC how much current to send to each motor.

It is common to take these three comonents and stack them on top of eachother. This is referenced as “the stack”. 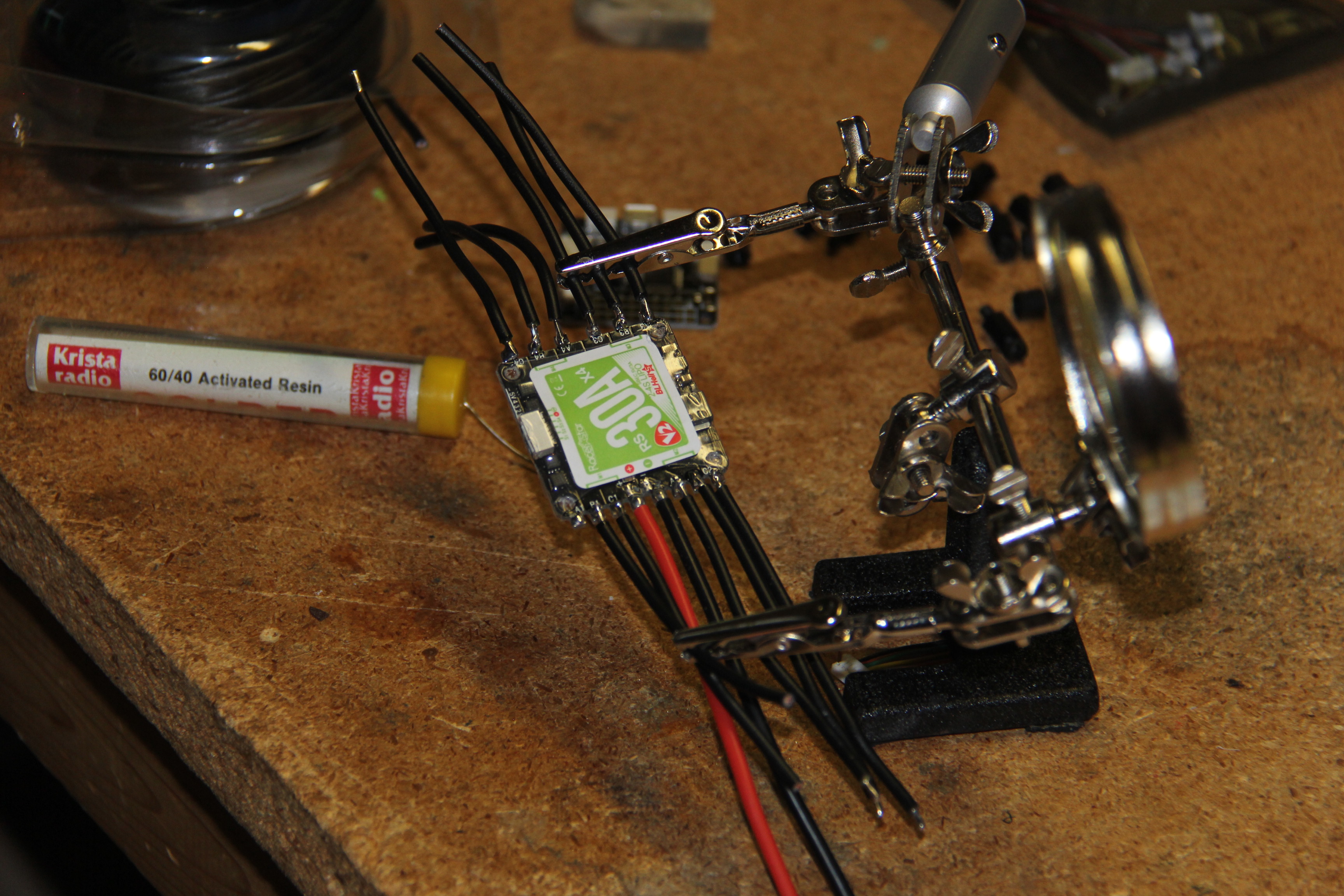 Wiring up the ESC. 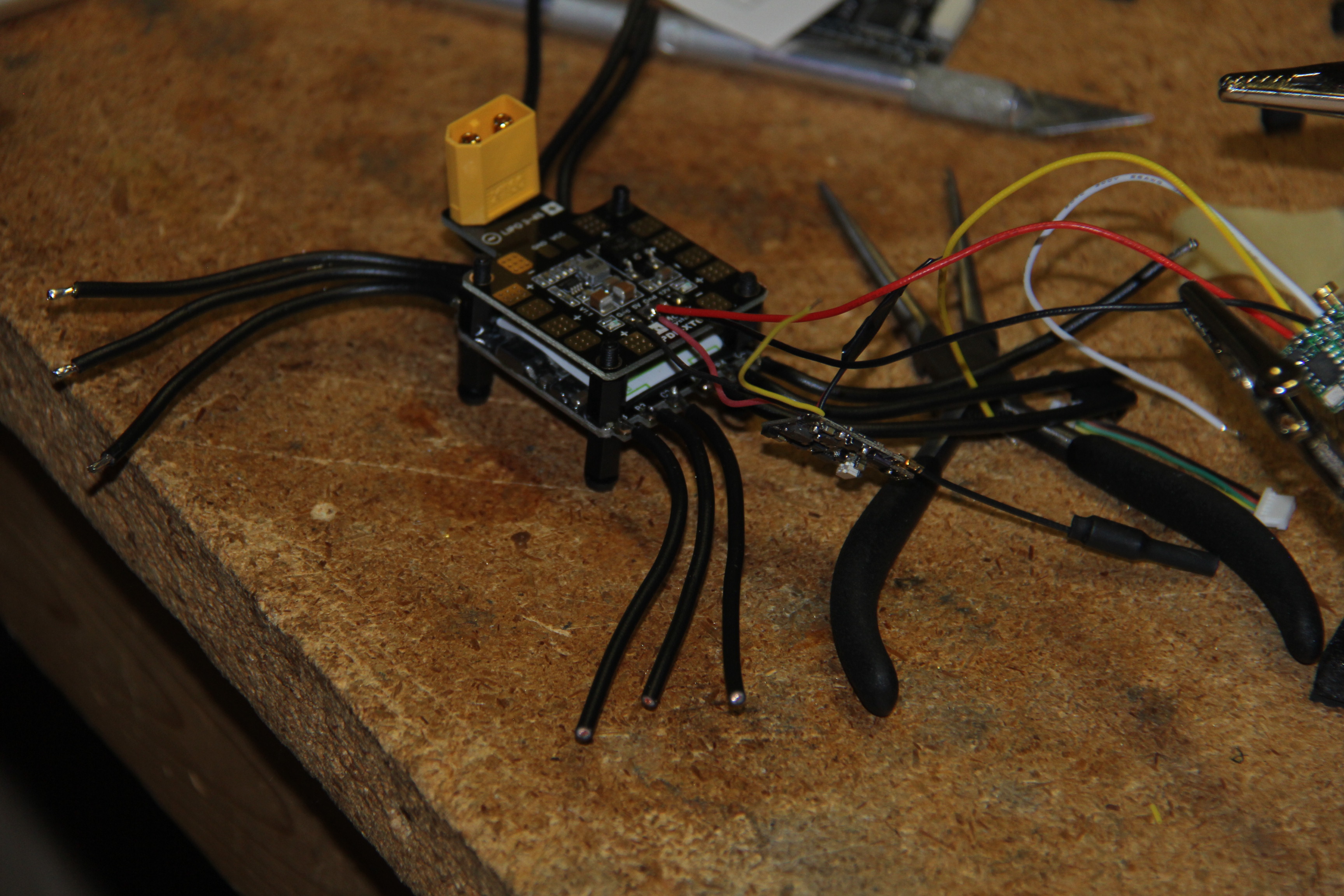 ESC goes on the bottom, PDB in the middle, and the FC goes on top. 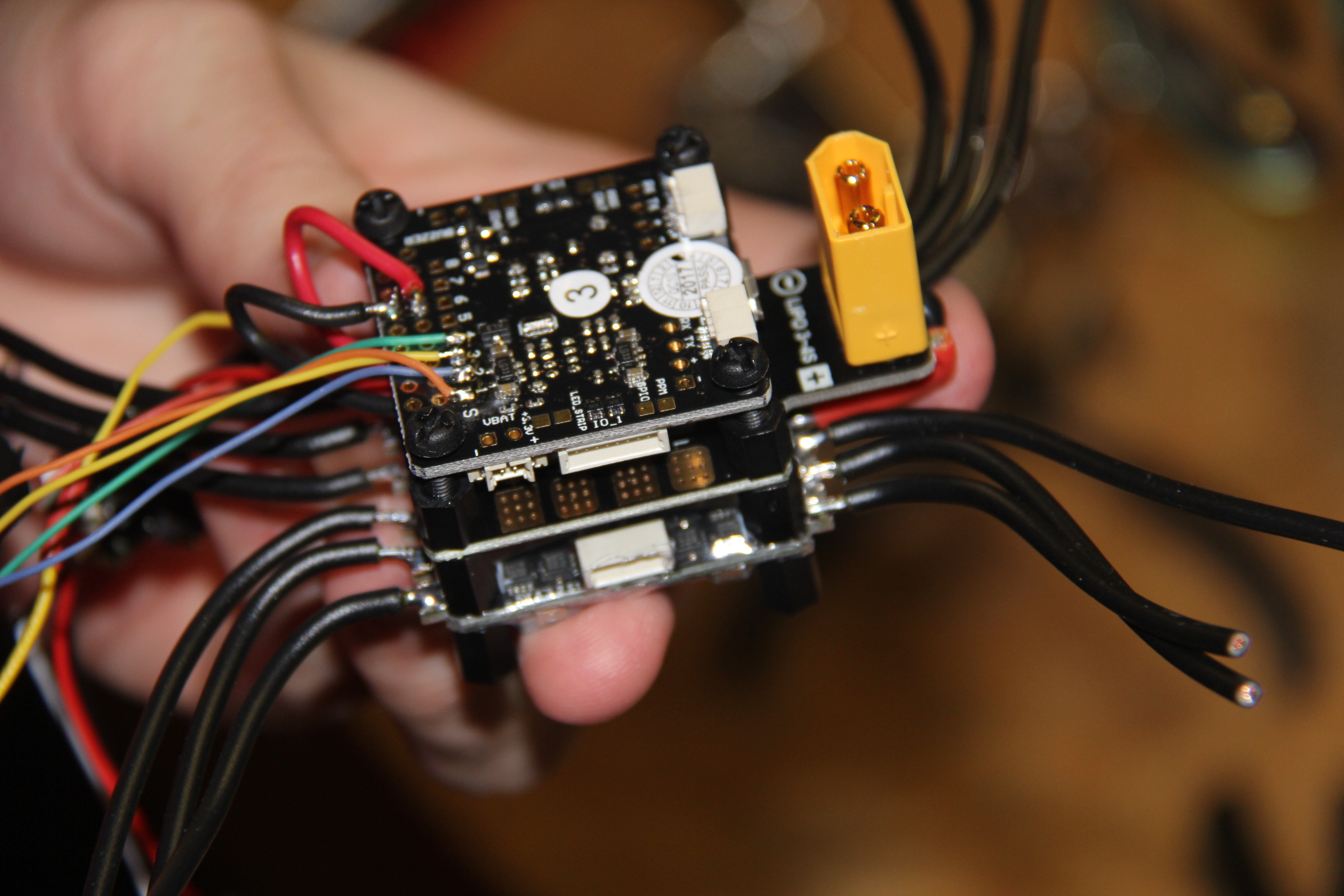 With most of the electronics done, I started the body.

The body is composed of 4 arms connected to a central body with a small canopy on top. Each arm has 2 weak points in it so that it will snap in the case of a rough landing. In the first itteration of the design I only included 1 joint. 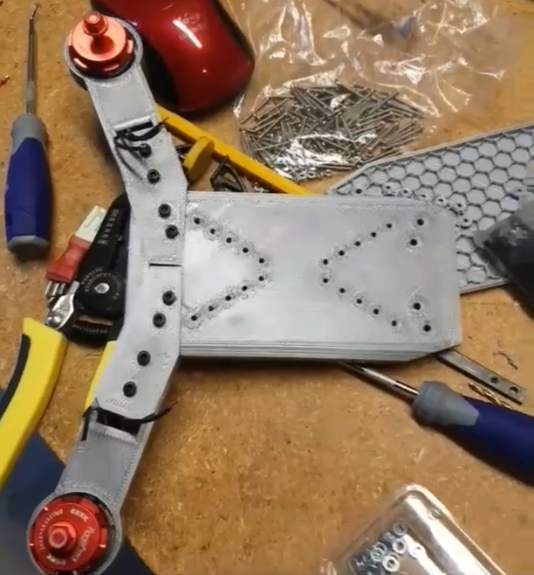 Print 2 more arms and then the body is done. I’ll add the canopy in later. 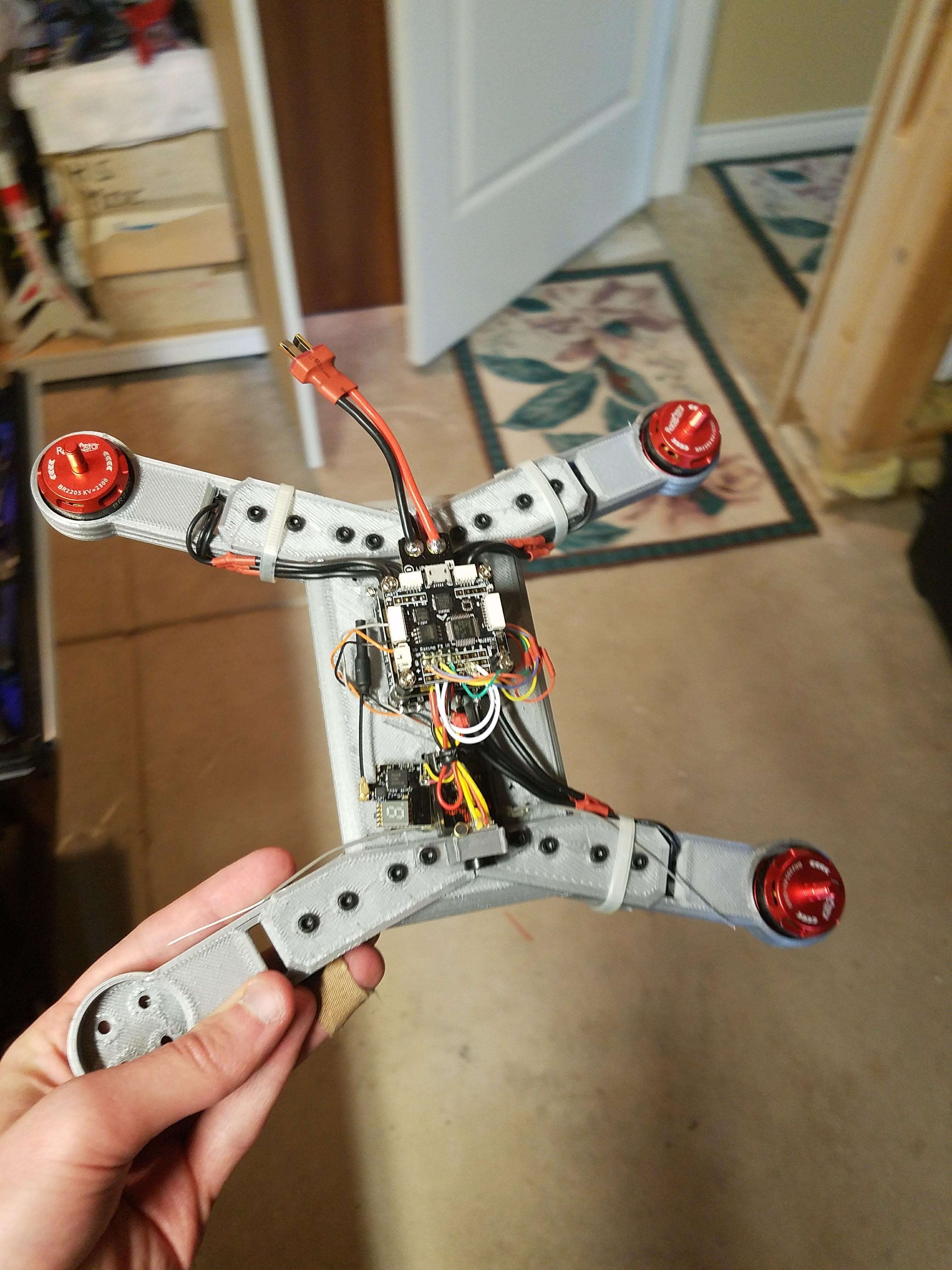 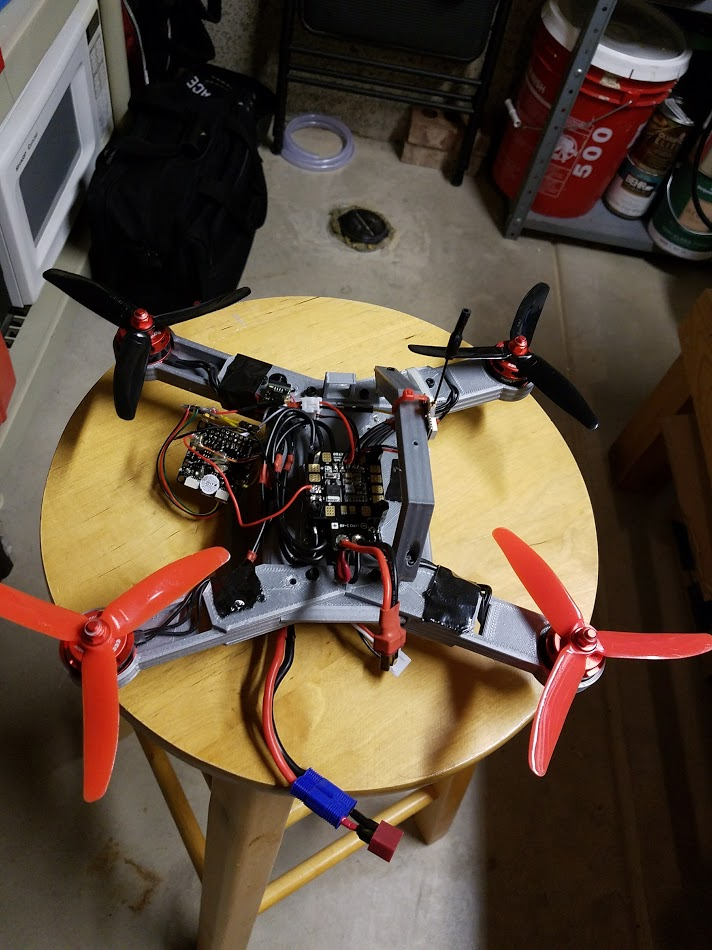 I had some FPV of it flying around but it appears to have been deleted. Next time I get around to flying this thing I’ll post the video here.